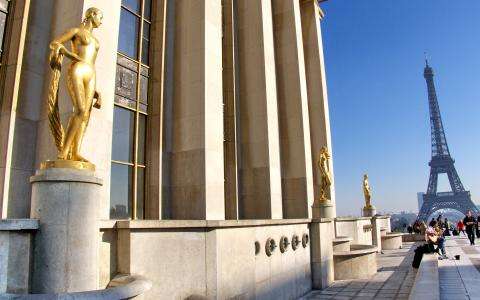 A twenty-minute walk from the Hotel Auteuil Tour Eiffel are three delightful places where you can eat while admiring the Eiffel Tower. Here are those three gourmet addresses facing the Iron Lady, each with its own distinctive personality.

Japan in Paris at Hanami

On the forecourt of the Aquarium de Paris, a few steps from the Palais de Tokyo, you can change continents in the blink of an eye by entering the pop-up terrace of Hanami, named after the cherry blossom festival that is so popular in Japan. From wooden floors to paper lanterns, everything is reminiscent of the Japanese archipelago. Similarly, the menu takes up traditional cuisine, including maki and rolls, yakitori, tempura, and gyoza… Alongside ravioli, shrimp appetisers, rice and wok noodles. The only departure from tradition is the crêpes for dessert! Families can take advantage of their admission to the Aquarium and benefit from preferential treatment at the restaurant. There’s continuous service from noon until 21:00, so you can indulge yourselves at any time.

Italy at the Palais de Tokyo

A few steps away, on the forecourt of the Palais de Tokyo, still facing the Eiffel Tower, you can take a trip to Italy with Bambini's multi-flavoured menu. The restaurant team reinvents the concept of the popular canteen in a warm and friendly atmosphere. On the plate, the appeal is obvious with a selection of exceptional produce and a preparation that is both traditional and beautifully creative. Comfortably seated on the terrace, in the shade of elegant white canvas parasols, you can taste traditional Italian delicacies ranging from Sicilian arancini to vitello tonnato from the north, via artichokes with giuda, mozzarella fritters and other delights.

Forest: the universe of Julien Sebbag at the Museum of Modern Art

The young self-taught chef, Julien Sebbag, has laid down his knives at the Museum of Modern Art. The museum’s new restaurant, Forest, which the chef has conceived as a post-apocalyptic forest, is a place where art is everywhere, especially on the plate. There, nature takes back its rights in creative jubilation. On the terrace, facing the Eiffel Tower, you can savour this colourful cuisine of a thousand flavours in which plant-based ingredients are at the forefront. The Rainbow, a courgette carpaccio in several shades, is a delight for the eyes as well as the taste buds. But equally astonishing are seemingly simple dishes such as the Normandy beef rib and roasted potatoes or green asparagus. Fish and meat rub shoulders with creative vegetarian dishes and, to follow, why not succumb to the temptation of a sweet treat such as a strawberry Pavlova or rhubarb tart…?